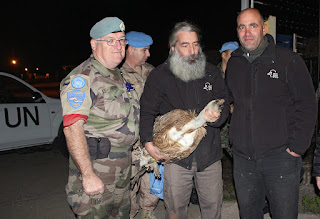 Obviously, the spying all’s fair, or not…
explained the arrest vulture in the village of Lebanon with the accusation that the big bird is working as a spy for the Israeli authorities.
What exactly happened? A vulture last Tuesday was found by the locals in the village of Bint Jbeil of Lebanon, which is located on the border with Israel. The big bird brought up the identity that prove the country of origin, as well as electronic tracking device after he had escaped from a state shelter for the protection of game.
The Lebanese authorities “arrested” the bird with the charge of espionage in favour of Israel and it took the intervention of the United Nations (UN) to negotiate the two countries, the release of the vulture.
The people in charge of the Israel Nature and Parks Authority, the official authority for the protection of birds in Israel saw the picture of the “vulture – spy” on social media and when they read that the vulture accused of spying for Israel, demanded the intervention of United Nations to let the bird free.
The “winged spy” was released to return home, free from every charge that the burden and Friday, Israel issued a formal announcement for the event in which he stated: “In a discreet operation with Lebanon and the great help of the United Nations, the vulture returned to the Israel Nature and Parks Authority”.
The media in Lebanon reported that the villagers in the village of Bint Jbeil were convinced that the bird was not a spy and left it free to return to Israel. However, this is not the first time a bird accused of spying for Israel. In 2011, Saudi Arabia had arrested a vulture that brought up the tracking device and had escaped from Israel. Then, the bird was accused of espionage, while the Israeli authorities have denied the accusation.
Source