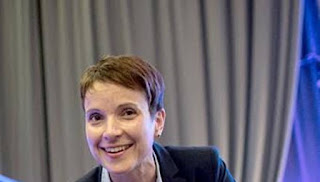 For this reason, single parties of government formation in Germany…
after the statement of the head of the party “Alternative for Germany” (AfD), Î¦ÏÎ¬Î¿Ï…ÎºÎµ Petrie, that the police should not use weapons against the refugee.
The eurosceptic party had indicated from the outset that it is opposed to the increasing arrival of refugees on German soil.
In an interview to the newspaper “Îœanheimer Morgen”, answering the question what should be the reaction of a police officer at the border when the refugees illegally enter the country, the Î¦ÏÎ¬Î¿Ï…ÎºÎµ Petrie pointed out:
“You have to prevent illegal entry at the border, if necessary, you will need to make use of his gun. This provides the law. No cop wants to shoot a refugee. But the use of a gun is the last resort”.
Immediate was the reaction of the head of the parliamentary group of the ÏƒÏ…Î³ÎºÏ…Î²ÎµÏÎ½ÏŽÎ½Ï„Ï‰Î½ social Democrats, Thomas ÎŒÏ€ÎµÏÎ¼Î±Î½, who said that the proposal Petrie is reminiscent of the order of the regime of East Germany shot people trying to escape to the West by jumping the Wall!
For his part, the representative of the Greens on issues of internal policy, Volker Bex declares that with this statement, the party AfD proves that he has declared war on the rule of law, and that is really dangerous.
“Inhuman, primitive and undemocratic”, featuring the statement of Petrie Jan Courtship, vice-president of the K.The party the Left (Die Linke) in the Bundestag.
The Petrie studied Chemical .Then, it dealt with the world of business , but earned the policy. Is a mother of four children, The ex-husband is a pastor.