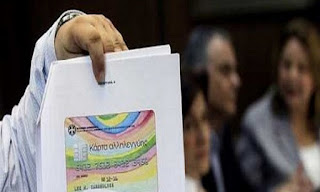 By Vasilis Angelopoulos
Monday credited the money on the card solidarity, feeding on 145.330 beneficiaries while at the same day will receive the…
rental allowance and the property owners who lease them to beneficiaries of the programme of Humanitarian Crisis.
Specifically, in accordance with two decisions that have at their disposal the dikaiologitika.gr approved two days ago by the deputy Minister of Social Solidarity mr Fotiou the credit transfer â‚¬ 2.424.864,49 as the fourth installment of the allowance for rental in the framework of the Programme to “Tackle the Humanitarian Crisis” where it is to be paid at 19.443 beneficiaries of the programme from the total of 30.575 (thirty thousand five hundred and seventy-five) beneficiaries of The decision states that the credit will be Monday 21.12.2015.
While approval of the credit transfer 16.297.480,00 â‚¬ sixth dose, in order to advance the charging of approved card feeding (“Solidarity”), in the context of the Programme to “Tackle the Humanitarian Crisis”, the total of which amounts to 145.330 beneficiaries. In addition for the charge cards of Solidarity from the National Bank, the Bank of Greece will charge the Account 200 the “Greek State â€“ Concentration of Receipts of Payments” and will credit the Bank with wire transfer. The credit always in accordance with the decision will also be made on 21/12/2015. To mention that the decision referred to in the credit in the special account of the National Bank and not in the accounts of the beneficiaries. It is customary on the same day to be credited from the bank money and the beneficiaries.