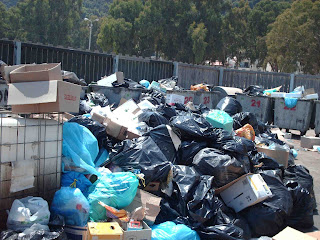 The workers of the LANDFILL, complaining about the non-existent storage from the ELASTIC and failure over time of the Î•Î”Î£ÎÎ‘ to keep the facilities, which have…
pay expensive the Municipalities of Attica, who tolerate all of these years, burning expensive machinery, injured the pilot and made attacks on drivers of waste collection.
By posting in the facebook the deputy mayor of Sanitation of the Municipality of Athens, Andreas Varelas asks the citizens not to lower Third of the garbage in the streets. While expressing the hope that the workers at the LANDFILL to suspend their strike and calls for any problem presented by the residents to call either in 1595 or and telephone to the office of the 2103470761-2.
The communication of the workers
The General Assembly of our Association, held on 15-12-2015 in the area of the sanitary LANDFILL of RACE, among other issues discussed as urgent fact, the injury to our colleague, the RTS Î£Î§Î™Î£Î¤ÎŸÎ¥, from alien to the space people, during unloading of the vehicle in the space disposal of waste in the LANDFILL. We have witnessed in the last two decades of many similar events, which are caused by the illegal entry of foreign persons, which illegal entry poses risks for the physical integrity and life of our colleagues, and of themselves. We emphasize for the umpteenth time that the existence of illegal inbox individuals puts at risk, and the infrastructure of our organisation, creating huge problems in the smooth functioning of the site and, therefore, on the smooth economic and social life of the basin. On the occasion of the injury to our colleague and resentful of the “unsolved” a perennial problem and the repeated calls for the state to take measures and safeguarding of LANDFILLS, without response, the General Assembly of the workers of the Î•Î”Î£ÎÎ‘ forced by the dire reality that we experience daily, but also as a support to the colleague, we decided a 24-hour strike on 22-12-2015 and further escalation if and when it has not been given a solution to the problem with decisive and effective until then. In the law, our struggle for self-evident security and physical integrity of the employees of the Î•Î”Î£ÎÎ‘ and the workers ‘ colleagues in the collection of the Municipalities/users, we ask the active support of the WTO-local authorities and associations of workers in the Municipalities. The fair request of us we have the cooperation and explicit assurance of the President of the Î•Î”Î£ÎÎ‘ and of the Executive Committee to “reclaim the effective storage space of the ÎŸÎ•Î”Î‘ Race, in the context of the programme agreement signed by the Region of Attica with the Ministry”.
Source