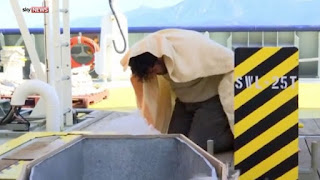 Even a wreck with victims of refugees from Syria. Even a dawn.
the Aegean sea became a tomb for three minor children. Three children who were in the boat that attempted to pass from Turkey to Samos, but failed to arrive alive to their destination. Drowned when the old wreck where they piled up the Turkish traffickers, sank.
The dramatic rescue operation of the Greek Coast guard and members of the MOAS (Migrant Offshore Aid Station) for the rights of refugees recorded by the camera of Sky News. Even a picture of shame.
The voices of the survivors who seek their own. The screams of parents searching for their children. Some of the children were saved. The same and a woman in the seventh month of her pregnancy. But a little girl of four years and two boys, two years old, didn’t make it. Were recovered dead.
Weep for hearts the time that the mother of one of the boys learns of the death of ÏƒÏ€Î»Î¬Ï‡Î½Î¿Ï…. Casting the isothermal blankets and takes in her arms the lifeless body. The and keeps crying. Can’t believe that she lived, but the child of no.
The moment of rescue of the refugees found in the icy waters of the Aegean sea frame-by-frame. The last one that survives is a man with dark hair and a beard. Has been “hooked” on a layer and I don’t want to leave. The rescuer pulls the boat.
When they reached the survivors at the station in Agathonisi to provide the first aid, the refugees recognized on the face of the 20-year-old man, the man who was driving the old wreck. Just like a dealer. His name is Ak ÎŸÏƒÎºÎ±ÏÏ„. The refugees said they go “crazy”. “I don’t know what happened, but our driver was going like crazy,” he told Sky News a doctor from Syria who was travelling along with the son of his sister.
The next morning, the young Turk led the ship of the MOAS and the Greek coast guard forced him to kneel in front of the lifeless bodies of the three children who lost their lives in the wreck. “Look,” shouts one, and they leave him there, to look at his victims. The tears on his face but it’s too late. The time is not come back for three minors.
The 20-year-old was referred to the prosecutor of Samos and is accused of a triple homicide, trafficking of migrants and challenge of the wreck. He said he traveled to Greece to find a job and that I was paid to drive the boat that passed them refugees from Turkey in Greece. It was, he said, four other Turkish traffickers who convinced him to get into the boat and for the first time driving a boat.
Source