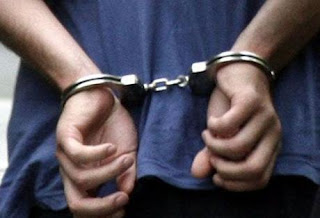 He was arrested, midday hours of 14-1-2016 by police officers from the… Security Department Salamis, a 30-year-old national for robberies and thefts on the island of Salamis. The co-defendant for the same offenses, it so happens that in addition to a 25-year-old national accomplice.
In weight, is formed, prosecution for the offenses of robbery and theft by aiding and abetting and for breach of the laws on weapons and drugs.
As it emerged from the research conducted, the 30-year-old arrested since last October, together with his accomplice who is being sought, undertaken systematically, with a different methodology every time, in the commission of robberies and thefts.
In particular, the perpetrators approached their victims, either directly or by various tricks, and then with the threat of a weapon or use of force, taking money, jewelry, valuables, as well as their vehicles, which is then used to commit further offences.
In his possession, as well as from house to house, found and confiscated a small quantity of drugs.
From the up to the minute investigation, have ÎµÎ¾Î¹Ï‡Î½Î¹Î±ÏƒÎ¸ÎµÎ¯ six (6) robberies, and three (3) thefts at Salamis, while investigating the involvement of other offences.
The arrest led to mr public Prosecutor at first instance of Piraeus, who referred him to a Regular Inquisitor.