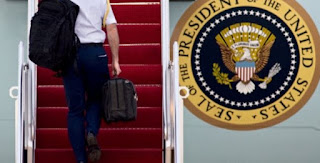 A black, leather briefcase follows the US president… wherever he goes, both within and outside the country. The named and as the nuclear “football” briefcase, in accordance with the “Business Insider contains highly confidential information, including the codes for nuclear attack.
Officially the name of the briefcase is “presidential backpack emergency” and always carried by someone in the army, so that it is a direct access to it, if the need arises.
According to Bill Gulley, a former head of security at the White House, the kit contains a red button, which if pressed will cause nuclear havoc, but:
– A black book 75 pages of possible targets, printed with black and red ink
– Another black book with shelters for the president
– Instructions for the use of Broadcast System Emergency
– Card with codes
A few times, from his presidential bag to raise a small antenna, which means that the leather briefcase is likely to contain some system of communication.
The nickname “football” was given to a secret nuclear plan, according to the former American secretary of Defense, Robert McNamara.
The military man who carries the bag, they are trained to inform the American president for all the details of a nuclear attack.

The first appearance of the black leather briefcase was made during the presidency of Kennedy after the Cuban missile crisis” in 1962, due to the soviet ballistic missiles deployed in Cuba.