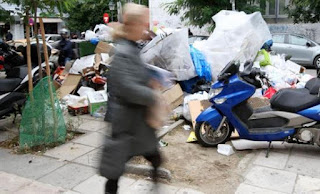 A temporary solution to the problem of waste management of the… municipalities of Pyrgos and Ancient Olympia, gives the decision signed by the acting secretary of Decentralized Administration of Dionysis Panagiotopoulos.
In particular, it is provided that will be transferred, within a period of six months of 7,500 tonnes of litter from the Tower to the sanitary LANDFILL of Aktio – Vonitsa, Stratos and Î’Î»Î±Ï‡Î¿Î¼Î¬Î½Î´ÏÎ±Ï‚ Lepanto, after having signed the relevant programming agreements.
Also, others of 2,000 tons of waste will be transferred from the municipality of Ancient Olympia, to the same Landfills of Aitoloakarnania.
At the same time, in accordance with the same decision, the Association of Solid Waste Management Ilia must take care of the rapid operation of the transfer station recyclable to the Company, that transports the recyclable materials to the management centre of Patras.
Even, as broadcast of the Athens Agency, requested by the municipality of Pyrgos, to proceed immediately to work on the restoration of the disposal site, located at “the Lakes”.
So, with that decision expected to remove quantities of waste that are found on the streets of Pyrgos, Ancient Olympia, and dozens of local communities.