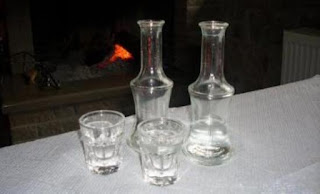 Quantity of raki, the total weight of 304,5 tonnes pledged by the… customs of Larissa, after checks carried out on 22/1, a team of Financial Police, in cooperation with the Police Directorate of Larissa and the Customs Service of the county, in company with the object of turnover in the wholesale trade of dairy products and wine, beverage, in Tirnavos.
According to a statement issued by the headquarters of the hellenic police and the general secretariat of Public Revenue of the ministry of Finance, during the audit are found in the warehouse of the company of 16 tanks with a capacity from 300 up to 2.250 kg, which contained in total 18.590 kg of distillate (tsipouro) and under construction winery identified nine tanks with a capacity of 5,000 up to 25,000 pounds, which contained a total 66.610 pounds of moonshine.
In addition, the distillery found four boilers distillation (Î´Î¹Î®Î¼ÎµÏÎ¿Î¹ Î±Ï€Î¿ÏƒÏ„Î±Î³Î¼Î±Ï„Î¿Ï€Î¿Î¹Î¿Î¯) and in the adjacent warehouse 48 tanks with a capacity of from 300 to 10,000 pounds, which contained a total of 219.323 pounds of moonshine.
From the Office of Larissa pledged the whole amount of the distillate, as well as the books of the company, in order to establish the legal possession of tsipouro, to ascertain the unpaid taxes and to impose the fines, while samples were sent to the Chemical Service of Larissa in order to determine their suitability.
The case was the prosecution’s first-instance court of Larissa.