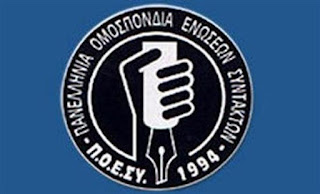 The decision for participation of journalists in… a general strike announced by GSEE for the 4 February, decided by the Board of directors of the Panhellenic Federation of Associations of Authors and Associations of states.
However, at the request of the Greek general confederation of labour for the coverage of strike events and rallies journalists will be on strike on Wednesday, 3 February from 06:00 in the morning until the same hour the next day.
The strike is declared in all MEDIA (print, broadcast, and online) public-private entity, the General Secretariat of Information and Communication and Press Offices.
The Journalists ‘ Union in a separate communication, notes that the journalists will be involved with all the workers, the unemployed and the pensioners in the marches of Thursday, 4 February, repeating once again, that it is a condition of the independent journalistic operation is the autonomy and independence of insurance Funds of employees in SMES and of their resources.
In the notice of Î ÎŸÎ•Î£Î¥ referred to the strike demands which are: The maintenance of the ETAP-mme as an independent, single and separate Fund to SMES, with inclusion of the insurance of all categories of workers in the Media and to ensure the advertisement tax, with the expansion of online MEDIA as a resource for financing the Funds main and supplementary insurance.