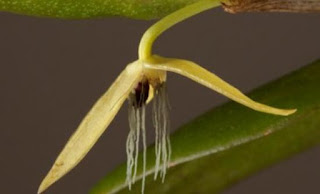 The orchids are the real masters of deception, with many kinds of… they look and smell like female insects to attract two star-crossed pollinators.
It seems like there’s a species that does not imitate insects, but humans.
The smell of man
American biologists say that the orchid Platanthera barracuda is a saltwater fish, a species that grows in swamps of North America, releases in the air substances that are present in human scent.
Attracting mosquitoes, which carry pollen from flower to flower and pollinate the sly orchid.
The researchers covered flowers of the orchid with airtight bags, collected the chemicals that are emitted and analyzed with the techniques of gas chromatography and spectroscopy of mass.

Apart from substances that are found in other flowers, the analysis revealed a number of chemicals that have been detected in human sweat, reports the website of the journal ‘Science’.
The “human smell” of the orchid is hardly distinguished by the human nose, but it seems that appetizing to mosquitoes: laboratory experiments showed that exposure of insects to the smell triggers electrical activity in the nerve endings of the antennae, announced by the researchers at a conference of Comparative Biology in Oregon.
The research team is now engaged in behavioral studies to confirm the findings and to discover chemicals that could be used as bait in insect traps.