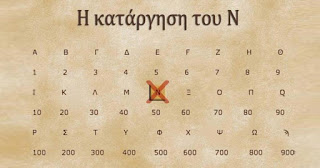 Every word came from the “ÎŸÎ½Î¿Î¼Î±Ï„Î¿Î¸Î­Ï„ÎµÏ‚”, with accuracy and not random and has a direct Cause and Effect relationship, between the Signifier and the Signified…
The “N” coordinate the brain.
Relatively recently (1996) in the Medical Journal MEDIZIN-JOURNAL in Germany, published a scientific paper, according to which: “The pronunciation of the letter “N” carries oxygen to the brain, and that it was not a coincidence of the placement of the “N” in the middle right of the Alphabet â€“ in the first Greek Alphabet with 27 letters.
Also, at Harvard, medical research found. that the recitation of the Homeric Epics in the original, among other things, it’s good for the heart, as a respiratory exercise.
And I am entitled to ask: Why we’ve become pursuers of “N”?
But I wonder: Is it coincidence that we got rid of the letter “N” at the end of the words and our school-books write the “area” (!), instead the area!
In school aids, but reading ” the area “, ie. there is preserved in the N, while the official Rule in the books (ministry of education, Pedagogical Institute) have been removed!
What is the reason for this extremity is? Why officially Î´Î¹Î´Î¬ÏƒÎºÎ¿Î¼Îµ in our schools rules constructed arbitrarily for? e.x. yesterday I met the Mayor (the friend, the Counselor, etc.). The letter N is organic, and when you cut it it hurts.
If someone contends that this is a minor detail, I have to say that “the detail is keeping the Parthenon”!
To remind you, but here and the nice, ironic text of Fr. Elytis: “A VISUAL SOUND”, where he concludes, “No Herod would not dare to order such genocide, such as that of final-N-is, unless you” want the visual of sound”.
THE C. Ritsos also wrote: “And the words veins. Inside the blood flows”.
Unfortunately, however, Î´Î¹Î±Ï€Î¹ÏƒÏ„ÏŽÎ½Î¿Î¼Îµ today, that after the Ni, it comes and the order of the final Sigma (s). Some journalists in the channels say, “the method”, the “street”, “the full! inclusion” (!) … Grow so arbitrarily a negative language model to our young people with the enormous power of the MEDIA and the school is helpless to react, and the society passively accepts as approximately fatal to this development.
After all this, I express the following view, and I submit to the Conference my own “Theory” about this issue: Internationally, it is studied the unique musicality of the Greek Language and its impact on the mental clarity of a man.
The letter “N” stimulates the brain positively, and enables man to think correctly. The final Sigma calms the man. This accepts and the modern Psychiatry.
The Ancient Greeks knew all of this and it is no coincidence that only we, the Greeks, say, “I said, with the Ni and with the Sigma” and we don’t say with other letters (although we have in the endings of words and other letters), because the Ni triggers our mind to think correctly, and the Sigma calms our souls, after we talk in public or in private.
Modern Psycholinguistics accept that Language and Thought are born at the same time and evolve in parallel, and constitute at any time a Î±Î¾ÎµÏ‡ÏŽÏÎ¹ÏƒÏ„Î· section.
The Language embodies the thought and the Thought is transformed into Language.
It is a coin with two sides. There can’t be one side without the other. There could be no Greek Thought without the Greek Language. It is a fact that the quality and quantity of “records” in Paragraph identifies the intellectual level of each nation. Therefore, the mental level determines the ability of creating Culture.
The Greek Alphabet, in the course of thousands of years was initially: Ideographic, then devised the Iconographic, then we have reached the Î“ÏÎ±Î¼Î¼Î¿Î³ÏÎ±Ï†Î¹ÎºÏŒ, then the Î£Ï…Î»Î»Î±Î²Î¿Î³ÏÎ±Ï†Î¹ÎºÏŒ (Linear A and B), and finally established the present Î¦Î¸Î¿Î³Î³Î¿Î³ÏÎ±Ï†Î¹ÎºÏŒ, which is unsurpassed and which is due to the creation of the Greek Language and the Greek Ecumenical Culture.
We have a duty to preserve, as the apple of an eye, the Greek Language and to resist the abuse.

Shock: How the tobacco industry managed to influence the legislation.Eh? 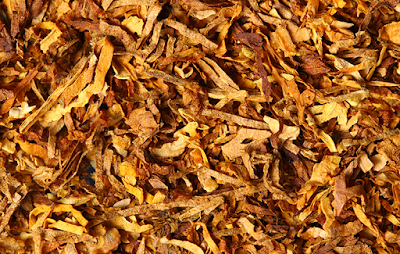 Some of the largest tobacco companies in the world, managed to delay or even…
Read more “