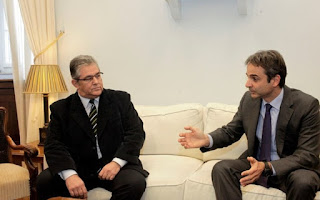 “Despite the large ideological variety, there is a respect for the…
the historical path and the institutional role of the COMMUNIST party”. With this phrase, welcomed the president of the SOUTHWEST Kyriakos Mitsotakis Dimitris Koutsoumpa in his office in the House.
“As is well known, we have a very large ideological differences with the COMMUNIST party of greece, but there is absolute respect for the historical and the institutional role. Despite the differences, I thought, and I believe that there should be a channel for communication and discussion with the parties of the Greek Parliament, whatever the ideological background,” said mr. Mitsotakis, and he said that we live in a time of great tensions.
“We live in times very difficult, we live in a time of great social tension. The society is boiling and we all have our own way, each from his own starting point not to encourage either social automation, and facilitate, so as to relieve the very great pressure that I think all of us see”, added the president of the SOUTHWEST and concluded:
“I believe that everyone in his own way and from his own point of view may contribute to this.”
“As you said is a very difficult time, the Greek people can’t take it anymore, he has paid too much these years, he’s bleeding, literally, from the economic crisis and, of course, with the responsibility of the government and of the previous and the responsibility of the current government of SYRIZA, so understandably, rebel, understandably frustrated, understandably frustrated and stands up,” he said, for his part, mr. ÎšÎ¿Ï…Ï„ÏƒÎ¿ÏÎ¼Ï€Î±Ï‚.
He said that “the Greek people, the labour-people’s movement has the experience and knowledge, to determine the employees themselves of the content of their struggle, much more to determine the forms of struggle which claim their law” and stressed that the COMMUNIST party considers “that all of the fighting styles, since it is based on their real interests, the interests of the people and the country should be claimed”.
“The COMMUNIST party of greece, you know, has expressed its solidarity in these struggles and for the workers of the private and the public sector, for farmers and for the self-employed, scientists, employees or self-employed, the young and the young that are in the path of struggle, and we believe that this struggle can be scaled on the basis of the decisions of collective bodies and, of course, means there can be up, and the great social-democratic alliance with the right content match and requests in a direction such that it can claims really the just demands and of course there are position that all employees, regardless of whether they vote COMMUNIST party of greece, ND, SYRIZA or any other party. This folk alliance, we believe, that may be the future of this place,” concluded the SECRETARY of the cc of the KKE.
Source