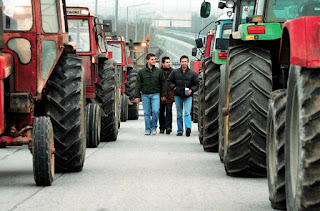 More than 15,000 balers have lined up…
in central points of the national road network of the country with the thousands of farmers who have taken to the streets to harden today and through the Weekend, their attitude, asking the government not to proceed with the sweeping changes he’s planning to insurance and tax.
At this time the recorded checkpoints are 49 in total, while in the next few hours is expected to set up and new. The largest of these with over 3,000 tractor is in Nice, where the Highway is essentially closed from the afternoon of the Fifth, and the smaller one with 300 tractors in Kilkis. Tonight will take place at areas councils, where the farmers are expected to decide the further movements of them with the most important of these is the permanent closure of nodal points on the national road network.
Central points of Î¼Ï€Î»ÏŒÎºÏ‰Î½ set up is the Tempi valley, the Castle in Boeotia, the offices of Chestnut trees and Gardens, the Bastion and the Ilium. At the same time, farmers will exclude also the ÎœÎ¬Î»Î³Î±ÏÎ± and the side street of Egnatia in ÎšÎµÏÎ´ÏÎ»Î»Î¹Î±. These exclusions will make today, and the farmers and ranchers of the block in the ÎÎ¹ÏƒÎ­Î»Î¹ Alexandria while for a couple of hours it will stay closed on the national highway Thessaloniki-Edessa at the height of Chalcedon.
As pointed out in an online journal, the secretary-general of the Pan-hellenic Union of New Farmers, Stelios Vogiatzis, “a young farmer who goes now to the profession if it is as perks of the single payment of 1,000-1,500 euros and is in the bottom class have to pay for insurance contributions, at least the money that it will take”.
“On the set of the measures promoted by the government will pay for tax and insurance, 75% of the net us income. When a farmer makes â‚¬ 5,000 and give him eur 4,000 in taxes and insurance what’s left to live? We will not stop our struggle and will do whatever it takes, hardening in the next few days our attitude,” he points out.
“If you don’t understand the government and does not withdraw these plans, in the next steps will be to go down massively in Athens together with our machines. From hardening slowly stand. First I would move some of the blocks in the permanent closure of roads. Our descent to Athens will be the final us hit, and if you don’t withdraw we will be back at the roadblocks. We will not stop our struggle,” she pointed out, yet, mr. Vogiatzis.