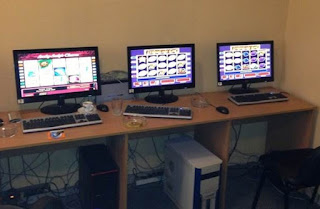 In a casino, he was turning the cup of coffee, which he offered, and internet services, a…
27-year-old currently, she, with the sums of traded daily is high.
More specifically, in the interior of the store, which is located below the Psilalonia, there were twelve computers, which were connected with the illegal games “fruit machines” and “tic tac toe”.
Security men of Patras conducted a “raid” in that shop and arrested the owner, a young, temporarily in charge store and a 45-year-old Italian.
The computers were seized, as well as the amount of 170 euros.
Source