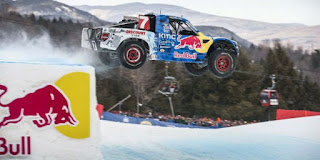 H Red Bull tends to do special events which ÏƒÏ„Î¿Ï‡ÎµÏÎµÎ¿Ï…Î½ main in sight…
In this context, pack drivers the american league Pro4 and organized by a different race in the snow.
The idea for the Red Bull Frozen Rush (so called race) started three years ago and the success that mark then established.
The V8 motor of 900 horsepower on fire and the battle was lit in a specially designed track where the four-wheel drive beasts and their drivers gave the best of themselves to demonstrate that, even in the snow they do just as well as in the soil.
The winner was Bryce Menzies, who won the champion of 2014, Ricky Johnson.
Enjoy the video highlights of the match