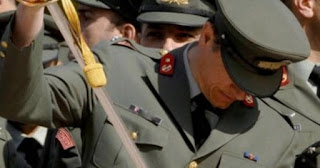 Reminding what is stated in the 2014 the members of SYRIZA, when condemning the “inhumane working conditions and… exhausting hours” of the Military and promised that “cannot be tolerated”, first and foremost, why “not in line with the requirements of a modern army with high morale,” the Union of Military Region of Epirus sent a letter to the MOD asking to be, at last, a solution, a universal, which can be applied in a matter of hours after problems still exist.
Life-saving will be for the daily lives of themselves and their families, and the acceptance of a standing offer made by the Associations for Î±Î¼ÎµÏ„Î¬Î¸ÎµÏ„Î¿ with the completion of 25 years ‘ service. The authorisation of child rearing with the conditions laid down in the law for all Greek citizens is also a request with a large value for parents Military while important will be the assistance of the Military if you built an ERR and Î£ÎŸÎœÎ¥ in the border.
Also the Military are reminiscent of the letter that the use of the real estate of the Armed Forces may have a positive effect on the restoration of the proper administration of the single aid, while, given that SYRIZA and ANEL are committed that it will implement the decision of the Coe is requested and the salary recovery of Strains with the application of a decision Are, request that gains new momentum after the government’s decision to give increases to civil servants.
Finally, the Military of the Î•Î£Î Î•Î—Î  , as they did in the past, and with support from members of SYRIZA who Ï€ÏÏ‰Î¸Î¿ÏÏƒÎ±Î½ the documents in the House, remind people of the need for preservation and strengthening of the Units of the Continent. For these, and not only, requesting and meeting with the political leadership.
See the whole letter