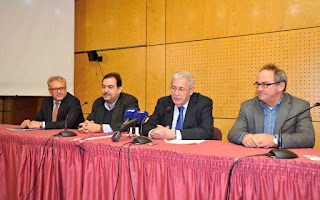 With the new year is expected to start the discussion in the Parliament, for the reform of Local self-Government in Cyprus, said…
yesterday the president of the Union of Municipalities, Alexis Galanos. Said yet that the reform progresses on the basis of the Italian model, which provides clusters of Municipalities and consolidation of services.
Speaking at a press conference for the 32nd Annual General Meeting of the Union of Municipalities on Tuesday, mr Blue said the government has already sent a bill in the House, with the Union of Municipalities continues in parallel to the contacts with the minister of the Interior in an effort to find some consensus solutions to this.
He admitted that there has been progress in these meetings, saying that significant gaps and omissions accepted, and removed controversial points related to the future functioning of the Municipalities.
“There is a general consensus that we proceed with the Italian design, not by letter, but in terms of the evolutionary form of clusters,” he said.
As explained by the president of the Union of Municipalities, the model that is being promoted provides the solution of clusters of three types, Municipalities, communities as well as mixed. He added that what will be the specific clusters will be determined by regulations, which will go at the same time with the bill.
Fill that is still discussed the question of provincial clusters and a single urban authority based on county clusters, while the minister raised the issue of a single planning and building authority. He said that the important thing is to be given to the long term implementation and development of the new model.
Mr. Blue stated then on the finances of Municipalities, saying that nothing can proceed with the new model unless there is a radical settlement of the financial problems facing the Municipalities. The debate in the Committee of the Interior, as he said, is expected to start in January.
Source