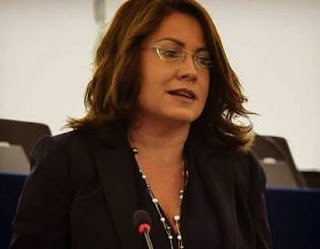 Read the announcement: “Signal of risk for the survival of small and medium-sized enterprises in Thrace, that they haven’t received since 2010, the subsidy of wage costs for 12%, they emit in a joint initiative, the member Evros Anastasios Î”Î·Î¼Î¿ÏƒÏ‡Î¬ÎºÎ·Ï‚ and the mep for the SW and EPP Maria Spyraki.
With an urgent question to the European Commission, mr Spyraki wants to know if there is the possibility of payment of the statutory payment of 12% of the wage costs from the new NSRF 2014-2020.
Also, the mep asks the Commission to clarify whether the EU is putting up obstacles to the granting of the specific aid that aims to assist the development in economically weak regions, a practice followed in many member states, in accordance with the regulation . Subject barriers by the EU invoked in the Greek Parliament, the minister of Economy, Development and Tourism Giorgos Stathakis.
Preceded by the 1st of December timely question of member of Evros Anastasios Î”Î·Î¼Î¿ÏƒÏ‡Î¬ÎºÎ· to the minister of the Economy, which raised the issue of the risk of the limitation of the amounts attributable to the subsidy, 12%, amounts which have already been taxed.
Mr. Î”Î·Î¼Î¿ÏƒÏ‡Î¬ÎºÎ·Ï‚ asked also mr. Stathakis for the possibility to be able to netting of non-paid subsidy with the existing obligations of businesses to the State and the insurance funds.
The full text of the question by Spyraki is as follows:
“The Greek state grants with national funding support to companies operating in economically disadvantaged areas of the country. The aid was provided through a grant rate of the wage cost of the Manpower Employment Organisation. The objective of the aid is to remove objective inequalities that distort competition, and encourage the creation and preservation of jobs in disadvantaged areas.
In accordance with Regulation (EC) no. 800/2008 of the Commission, national regional aid promotes the economic, social and territorial cohesion of member states and of the Community as a whole. National regional aid is designed to assist the development of the most disadvantaged regions by supporting investment and job creation in a sustainable context.
However, by 2010 the aid is granted to beneficiaries with a risk of limitation of the debt, and recently announced the cancellation of the by the Minister of Economy with the argument that there are obstacles from the side of the European Union.
Will the Commission say:
1. There is a specific European legislation or a decision which obliges Greece to lift the granting of the above national regional aid for?
2. There is the possibility of strengthening of the economically sensitive areas through the subsidy of the wage costs through the structural funds for 2014-2020?”
The full text of the question mr Î”Î·Î¼Î¿ÏƒÏ‡Î¬ÎºÎ· is as follows:
“For nearly three decades, since 1987, has institutionalized the subsidy of the wage costs of industrial, craft and mining enterprises of border areas, which shall be paid by the OAED, through funds of the Public Investment Programme and amounts for businesses of the Prefecture of Evros, at the rate of 12% on the total wage costs. It is essential to support border operations and employment in the sensitive areas of our country.
In violation of the relevant explicit legislative provision of article 21 of n. 1767/1988, this subsidy has not been paid for the years from 2010 onwards, creating serious problems in the functioning of the beneficiary enterprises and depriving them of necessary financial resources, necessary for the survival of many of these. As an excuse for the relative delay shown by the services of the OAED, the non-transfer of required funds to the budget of the employment agency of the Public Investment Program (PIB) of the Ministry of Economy, Development and Tourism.
At the same time, the fate of the programmes of the NSRF, which have been announced here for months and anticipated by the business world and the unemployed as a breath of liquidity and opportunity for the development of employment.
Unemployment is the number one problem of the Greeks, and especially of our young people, while the aggressive policy against entrepreneurship closes or turns away abroad more and more Greek Businesses. The tardiness in the payment of guaranteed subsidies to the enterprises in the Prefecture of Evros, a burden on these businesses and intensify the problem of unemployment in the region.
For the above reasons, will the Minister:
1. When will be paid a subsidy of 12% of the beneficiaries? There are the necessary for the financing of the measure estimates in the budget.D.E. in the year 2016;
2. In the case of non-inclusion of the necessary funds in the budget.D.E. year 2016, would establish at least the possibility of clearing the already existing obligations of the beneficiaries to the state and the insurance funds?
3. The programmes of the NSRF will be submitted? What other measures do you intend to take in order to support entrepreneurship and employment, especially in remote areas such as the Evros you?””