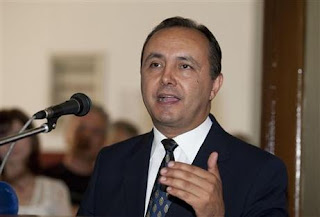 Vociferous against the government’s plan to reform the Insurance system, which provides for new reductions in pensions and increases in contributions from employers and employees appeared mr. Theodoros Karaoglou, in an interview given this morning on the radio station of the Athens-Macedonian News Agency “Agency 104,9” and the show “Everyday”, with journalists Christos ÎœÎ¬Ï„Î· and Nicole Kazantzidou.
The Mp of New Democracy in the B Thessaloniki combined resolve of Insurance with specific development proposals, setting it on the table of the national dialogue three, according to their personal point of view, axes of debate. First of all the unification of all pension funds into one main and one auxiliary, secondly not to retire anyone under the age of 60 years and thirdly to put a ceiling on the amount of the maximum pension.
“The Insurance will not be resolved with dropped that line of measures, reductions in pensions and increases in contributions from employers and employees. On the contrary, they need policies that will help the growth,” he pointed out, stressing that the government’s logic, truncation of supplementary pensions and increase in business costs does not lead anywhere. As he noted pointedly: “For there to be revenue for the State there must be jobs. If there are no workers, there will be no contributions and, therefore, resources for the insurance. Practically, this means that we need to provide incentives to businesses to hire staff and to stop to fire, because the precise work reduces the jobs”.
Even featured “communication games” the claims of the Government staff that gives battle to not cut off the main pensions, pointing out that what really matters for retirees is to not see their pension to be reduced further. “The point is not to reduce the incomes of the world anyway… dry and not if it will decrease the main or the supplementary pension. What counts is the amount they get in their hands at the end of each month,” he concluded, pointing out that the attitude that will keep New.D. across the Insurance does not depend on who is elected President of the party after the second round of the ÎµÏƒÏ‰ÎºÎ¿Î¼Î¼Î±Ï„Î¹ÎºÏŽÎ½ elections of 10 January 2016.