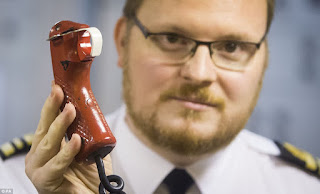 Yes, it is a fact easily could…
to spend for a vintage joystick. However, it is not.
Is the button for the activation of one of the Ï†Î¿Î½Î¹ÎºÏŒÏ„ÎµÏÎ± weapons in the world, of nuclear weapons in Britain.
The particular joystick, which is in the hands of two officers of the submarine HMS Vigilant, one of four british carrying missiles Trident, which have nuclear warheads.
The 38-year-old officer of the submarine HMS Vigilant, whose name is not published in the british media, for obvious reasons, a father of three children, has trained for 16 years so you can hold it in his hand of the joystick and to push only when the commander of the pronounce on the phone the words “missiles for strategic view”.
The officer will execute the command, I pressed the button, without knowing neither the location you hit, not what is happening, nor who the target is. I’ll just pull the trigger without any hesitation.
The officer of the HMS Vigilant, speaking yesterday for the first time, as notes the Daily Mail, he said that what it does is a combination of “honor and responsibility”. When asked about the if it is at any time ready to pull the trigger, he answered yes, saying “we must act under the orders of the political head. When we are at sea we can’t know exactly what has happened. So we need to have confidence that they know what they do.”
It also stated that it is important the fact that no one can do the whole process alone. Can’t execute the launch sequence of the missile by himself. There are always a couple of people who do this procedure, one can perform a part of the process and the other the rest.
The commander of the sub and his deputy are the only two men in the submarine that they have access to the point that store, of course, the joystick. Coming out, from the point at which it is kept, every time I have a service which explains the fact that the red color of the controller has worn out.
The code for the security of nuclear weapons, guarded by a high security system, the Ministry of Defense and must be identical to that stored in a nuclear submarine.
According to the BBC, a couple of officers, who pass a test for mental stability, sitting in separate sections of the submarine and enter the code at the same time on a computer, allowing the launch. The prime minister gives the final “green light”, but for the final decision other factors involved during the whole process.
The two scenarios in which the commander could pull the trigger
In the first, the prime minister is alive and it is he who gives the command for the nuclear attack. The prime minister himself sends a coded message which will have to be certified the authenticity of the operators of the submarine.
“The objectives are locked from the coast and transferred to the submarine, we can’t know anything about them,” he adds. “When we get the signal and validate the content, while making sure that the mandate gives the prime minister and not someone else trying to fool us, then we begin and we are preparing the missiles for launch.
Gradually starts the chain of firing during which the personnel of the submarine has individual, secret missions that cause the launch of the missile. Throughout the activation process we act with the principle of control from the two men, in order to ensure that there will never be a time when a single person after the prime minister could have full control of the system of arms”.
In the second scenario, the prime minister is dead. The captains of the ship, but they have in their hands the secret letter to the prime minister (which he writes a few days after taking office) for the movements in which we have to proceed in the event that Britain is destroyed in a nuclear attack. In this case, the submarine captain will have to perform the command.
Even the prime minister said that doesn’t know where they are at any time in the submarines, which can fire missiles Trident just below the surface of the sea.
All four submarines, which date back to the end of the Cold War, is nuclear-powered and can operate for decades without refueling. But when the nuclear fuel runs out, the subs should actually be replaced.