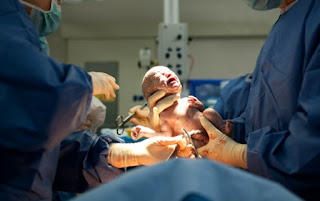 The record on births by caesarean section…
holds the our country, as well as six of the ten candidate mothers acquire their babies in the surgery, while the average in the European Union reaches approximately 25%. The rate of caesarean sections in Greece ranges from 50%-70% of the total births, depending on the maternity ward with the highest rates recorded in private. According to a story in daily newspaper, the permissible limit for caesarean by the World Health Organization is 15% of the Americans to raise this percentage to 20%.Around childbirth has set up a highly profitable industry with the births by c-section to dominate catapulting the cost of insurance funds, but also for families in the heights.
Indicative of a cesarean section for insured EOPYY, priced – depending on the room – from 1530 eur 12.300 eur and not included in the price for the reward of the doctor. As explain experts, the factors that lead to such large increased rates of caesarean section in our country, is, among other things, the following: lack of patience: The doctor finds that gone are the days in which women would have had to have live births and leads to Ï„ÎµÎ½Ï‡Î·Ï„Î® invitation birth. This, because it is usually done in an immature cervix, is not usually a result, when the c-section is inevitable. The ease of doctor’s and women with child:
The average time of a vaginal birth with a natural onset is 18 hours. The c-section is planned, and it’s quick. Besides, it’s not a coincidence that Monday and Tuesday are the days with the most births. The prevailing view of “once a cesarean, always a cesarean: The”bogeyman” for likelihood of rupture of the uterus if you attempt a normal birth, leading again to the surgical bed. However, the likelihood of a complication varies from 0,5% -0,7%.
Source