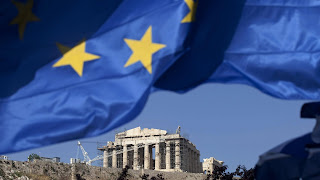 In diplomatic terms, but the spikes to be something more…
from clear, a senior official in the euro area, under the regime of anonymity always crossed generations, fourteen of the Greek government, sending multiple messages about what should be done from here on out, not only to turn the heads of the lenders but mainly to shut down the notorious first assessment.
And what I said: that political will is needed to close the assessment, that the government has already agreed to take measures amounting to eur 1.8 bn. euro 2016 (1% of GDP), that there are major thorns in the insurance that some ministers are not… serious, why appoint party executives in the Public and that the return of the quartet is not defined and nor is it going to… book tickets for Athens if the government does not take decisions!
The flogging of Greece from the eu official began… slowly. He stressed the need to complete soon the process of evaluation by saying that with this agrees the Greek side, and stressed that the discussions of the heads of the institutions in Athens with the Greek authorities “went very well”.
And somewhere in there, it started… bad. There are, he said, differences in insurance, the financial details of the 2016 and subsequent years, the reform of the public administration and the privatisation fund. And featured the themes of the first evaluation “composite”, not only from a technical point of view, but even more than policy”, noting, however, that “we all hope that the evaluation will be completed relatively soon”. And sent the first message: “the quality of the agreement takes precedence over the speed of achieving it”.
The sequel was even worse… the official of The euro area has set as a condition to close the first assessment to be operating the Fund privatisation, stressing that this is essential for several member-states of the eurozone.
Referring to the Insurance, although she said that there is progress in the discussions noted that we all recognize that this required a combination of factors, such as the retirement age, replacement rates and the period of payment of contributions. He also emphasised that the aim is to build a pension system that will be good for the formal sector of the economy.
And then came the… “bomb” for the emergency measures! Referring to the potential new measures for the 2016 recalled that it was agreed that measures should be taken which would correspond to 1% of GDP (eur 1.8 billion. euro approximately), but which need to specialize. As he said, the Greek Authorities and the institutions agreed to work on the budget 2016.
Then, I failed to comment on them, and the appointments of party executives in the Public, referring to the politicisation of the public sector and speaking for some of the “key ministries” in Greece that seem to have taken seriously the decisions of July!
And the best kept for the end. No one knows when it will turn the heads of the lenders. And they will not come back if the government does not take decisions. As he said, has not determined a specific date of reimbursement of the representatives of lenders to Greece, pointing out, however, that the large volume of technical consultations has been completed and that the key to this phase is the decision-making.
Source