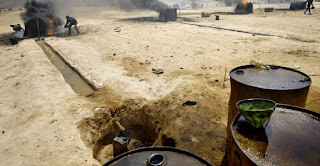 Confidential report of the Permanent Representative of…
Russian Federation to the United Nations on the oil trade and the role of Turkey brings to light the Reporter.
The report dated February 1, 2016 shall be addressed to the Secretary-General of the UN and the President of the Security Council, and bears the signature of Vitaly Ivanovich Churkin, Russian diplomat, permanent representative of the Russian Federation to the United Nations since 2006. The report makes a reason for continuation of original letters of 29 January, while for any clarification refer to the Russian version of the document, stressing that it would be grateful if it was included in the documents of the Security Council. It is, I don’t, for an unofficial translation, with all of nevertheless, the insignia of the UN.
The report features:
“The largest quantities of hydrocarbons exported from the areas controlled by ISIS, channelled through Turkey. Oil and petroleum products imported into the Turkish territory with tankers of fuel through the border control points of KarkamÄ±ÅŸ, (570 km south-west of Ankara, the province of Gaziantep, the AkÃ§akale, CilvegÃ¶zÃ¼, Ã–ncÃ¼pÄ±nar, (p.p. which is in the province of Kilis, who at this moment are collected thousands of refugees).
(See verbatim document submitted by the permanent representative of the Russian Federation to the United Nations)

Every day, 100 to 150 trucks fuel pass through these control points. In addition, the raw material is transported from rural roads that are not controlled by the Turkish security forces. Almost 4.500 vehicles used for this theme. In fact, a number of Turkish companies are committed to providing trucks to ISIS, including the Serii in Konya and Sam Otomotiv in Î‘Î·Ï„Î±ÎºÎ³Î±.
In Turkey, the raw quantities are delivered to the refineries of TÃ¼praÅŸ, which is located in Batman, 750 km southeast of Ankara. From ÎµÎºÏ‚Î¯ pass in the Mediterranean, with the help, of course, other smaller companies”.
And he continues: (…) “The company Turkish Petroleum International, in cooperation with the Turkish Government has entered into a contract with Kurdish businessmen from Northern Iraq, providing all the necessary resources on projects in the Autonomous region of the Kurds”.
(…) “The money from oil sales are used to purchase weapons, military equipment, ammunition and other materials. This equipment supplied the ISIS is mainly used in areas that are not controlled at the Turkey-Syria border”.
Source