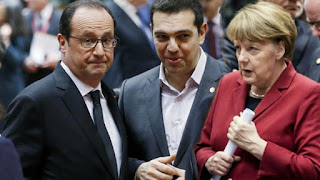 Completed after an hour and a half, the meeting of Alexis Tsipras…
with the German chancellor, Angela Merkel and the French president, Francois Hollande.
The Greek prime minister and the German chancellor attended the meeting without making any statements.
FranÃ§ois Hollande that cometh, declared that “there is still work to be done,” and added that there should be rules against speculation.
Athens is trying to secure even a verbal commitment that he will not close the border.
Source