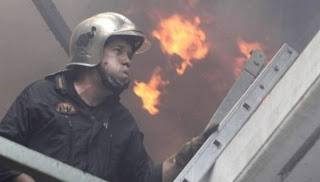 Alarm sounded in the Fire Service of Ierapetra, when a fire occurred in an apartment building in the center of the city…
Yes, the flames that in a few minutes were extended to all areas of the house, were to arrive in the apartment next door, where there were two small children with their mother.
Directly to the point rushed eight fire fighters with three vehicles and they have undertaken the task of extinguishing.
Firefighters immediately approached the apartment next door, in which were two children trapped, with their mother out of the balcony and delivers them to the firemen.
Crew of the AMBULANCE that was already in the area provided first aid to the two children.
Because of the fire the apartment was destroyed, but injured no one.
Source