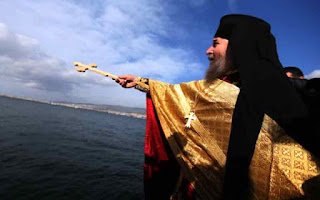 Alexander Contis
Shortly after the historic celebration of Lights, the. Kirill speaks at the…
Real.gr for the threats of the past, the refugees and the acceptance of the greekness of the city from the Turks.
“Previously when we did a function at the temple of Agia Foteini, call the police. Not accept threatening phone calls, which, fortunately, proved to be pranks, but in any case, we wanted to feel safe. All of these have changed, and the Turks seem to accept that a piece of the identity of this city is Greek”…
A few hours after the historic Dive of the Cross in the sea it rains, the Smyrna, the voice of the father Kirill’s still shaking from the thrill.
“Excuse me, we still don’t have land, we are in a spirit of bliss”, it is justified to explain that this year’s official celebration of the Epiphany, for the first time after the Destruction of 1922, equivalent to a miracle, for him and for the few Greeks of Smyrna.
“Previously the city was a symbol of Turkish nationalism. Now the Turks are in a revision phase. Is the tourism who want to develop, however, is that Greece is for them the gateway to the West, something that they can’t ignore you”.
For the ceremony of the Epiphany, father Cyril came in contact with the Turkish ministry of Culture, the municipal Authorities and the muslim religious leadership, the mufti of Izmir.
“Ten years ago we had done before the ceremony, but the move then was a bit of a coup. This year, with the blessing of Patriarch Bartholomew, we did the legal actions required. I sent letters out everywhere … and I was explaining what is the Sanctification of the Waters. I mentioned that the old years, a number of Turks who have visited the waterfront to see the Diving of the Cross”.
The Turkish Authorities were positive, with the result that on the 6th of January 2016 to written history. Father Cyril of the repetition of the celebration of Lights could mean the rebirth of the Greek community of Izmir, regardless of whether the Greek-Turkish treaties that have been signed, do not allow the formal establishment of a Greek Orthodox Church or recognition of the Greek minority in the city.
“Whatever is written into the treaties, the Turks themselves know that the history of Izmir is a multicultural and also informally recognize us. In official letters, they wrote: “the Greek Church of Smyrna””. Now, the objective is the strengthening of the orthodox community, which numbers about 300, the Greeks and the other of 7,000 eastern europeans.
“We organise events such as a religious conference in February, scientists from America and Europe. We want to revive the Greek and orthodox identity of the city and I am optimistic that we will make it”…
Refugees
A descendant of Greek refugees from Turkey, and was born in Mytilene, father Cyril, connects this year’s blessing of the Waters with the contemporary refugee drama. “A Turkish journalist wrote for the Benediction of the Waters, that finally became symbolic, for there to be a clearance in the waters of the Aegean sea, after so many deaths of refugees”.
He often comes in contact with the refugees in the Middle East. “The temple of Agia Foteini come in a number of Syrian Christians refugees to attend the function. Some Syrians were present, and the Diving of the Cross. They tell me that if they stay in their home country will be killed for sure, while if you travel by boat, have a chance to not drown and to live…”
The historical Cross of the Epiphany of Izmir
At the beginning of the 20th century, the society of Smyrna was so progressive, that the day of Lights, to catch the Cross, dived and women…
In the Hearth of New Smyrna, the library and the small museum are hiding priceless treasures from the life of the thriving Greek community, and numerous reports of the special way that ÎµÎ¿ÏÏ„Î¬Î¶Î¿Î½Ï„Î±Î½ the Epiphany in Izmir.
Among the historical relics, there is a wooden Cross from the 19th century, used by the priests for the Sanctification of the Waters.
The celebration of the Epiphany in Izmir had dozens of features. The eve of Epiphany was called ÎœÎ¹ÏƒÏŒÏ†Ï‰Ï„Î± and on that day, the church was only the women and children.
Particularly was and the carol of Lights, which was the name of the children of Î£Î¼Ï…ÏÎ½Î¹ÏŽÎ½, which tell of the original sin.
For the president of Estia of Nea Smyrni, John Î Î±Ï€Î±Î´Î¬Ï„Î¿, these memories came to life after the ceremony last Wednesday.
“It was a memorial service that waited for the souls of those who were martyred and a promise of the few Greeks left that the light of faith and the power of love and prayer we will never allow to root the greeks from its natural birthplace,” says I. Papadatos.
Source