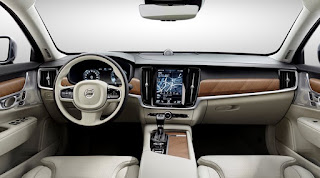 The Volvo S90 is expected to make its official european debut of the… March in Geneva and around the same time will start the launch of the well-known Î´Î¯Î»Î¹Ï„ÏÎ¿Ï…Ï‚ four-cylinder turbo engines. Who come from the XC90, a large SUV that marks the new design of the Swedish company that passes and the S90. As you can see in the video, the dominant element is the earthy colors in shades of wood that cover various parts of the dashboard, while depending on the version equipment the materials and color combinations vary.
Dominant element in the dashboard is the well-known touch-screen display with style and function that refers to a tablet, the full digital instrument panel, the typical gear selector and, more generally, the lounge mood that leaves the interior with the amazing performance of a sound system of Bowers&Wilkins (we’ve enjoyed already in the XC90). The Î»Î¿Ï…ÏƒÎ¬Ï„Î¿Ï‚ decoration combined with a variety of comfort systems and technology, while we have to say that towards the end of 2016 is expected and the station wagon S90.