Turned beach in Paphos at a “nudist beach”! 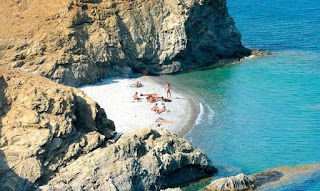 The wrath of dozens of swimmers and other patrons of one of the most busy spots of the coastal region…
Kato Paphos, cause the last few days some swimmers who, by acting like it’s a nude beach, they’re taking a bath with underwear, and then pulled out in public view in order to wipe and change.
The unusual situations are occurring, as reported in the town Hall of Pafos, several regulars of the beach than the Bathrooms of Kato Paphos, the seafront promenade that leads from the Municipal Baths to the hotels in Poseidonos avenue.
In one of the busiest parts of the tourist area with a strong presence of swimmers and other citizens who walk, play sports or enjoy the landscape from early in the morning, a group of four-five persons completely indifferent to the fact that displaying an image that may offend public morals, according to the complaints.
Older people, like complain about particular citizens, travelling on a regular basis early in the morning in the area of the boardwalk down from the hotels and to the east of the Municipal Bathrooms and despite the presence of many other people, don’t hesitate to get naked to put on, and to take their swimsuits, to wash off and change clothes. And all this, according to what reported in communal factors the complainants, while at exactly the same point there are cabins locker room who placed the Municipality of Paphos for this purpose.
This practice has caused in the last few days, reactions by many patrons of this beach, some of which have declared yesterday that are initially considered unfortunate and isolated incident that they were aware of. “But when the same incident we have seen to be repeated for several days, we stopped going in that particular area for bathroom”, they stressed. “It is unthinkable to allow the municipality to continue the same unacceptable situation in the heart of the tourist area. If the same people are unable to understand the consequences of their actions, let’s placed an employee of the municipal Authority to stop the bad before getting publicity and outside Cyprus”.
Source