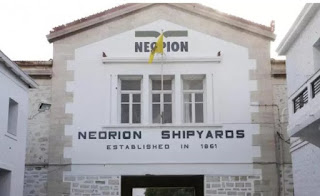 Enough “strokes” caused at noon today, the assembly of workers of the…
Neorio. “Brain” pleasantly, and for some….quite unpleasant!
What matters, however, is that employees of the Neorion, even though the “war” faced for the last time, left the gate of the Neorion, after quite a long time with a lot of smiles and head-on as they see their struggle vindicated.
Cause? according to information the president of the association of workers of the Neorion announced good news which confirms the parent company of the Rules A.E.
According to the same information, tabled a formal proposal for a takeover of a large investment FAND and officially start the procedures for the purchase of the Neorion.
The employees stayed until the end like a fist, and that, justified, and deserve congratulations.
Read the announcement of the company.
The parent company “Neorion A. E. Holdings announces that it is in early stage discussions with the participation of a group of investors abroad, the share capital of the subsidiary of the company “Shipbuilding and Industrial Enterprises of Syros A.E.”
In this context, from Tuesday 5 July 2016 will be a series of visits of special advisers of interested investors in the facilities at the Neorion Syros to relevant information on the situation of the Yard.
Source