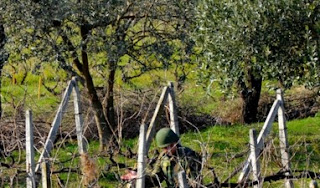 One surprise for today, a farmer in ÎšÏÎ·Î½Î¯Ï„ÏƒÎ± Trikala…
When he went to dig up the vine, located on the outskirts of the hill at the entrance of the village, next to a secular center, found in the root of the vine a projectile 0,75 mm. The grower was carrying the missile in another spot next to the vineyard and notify the competent authorities. Today at noon arrived at the point, a special bomb squad from the Ilium, men of the fire service in Trikala, Police, and AMBULANCE, just in case.
The bomb squad went to the spot where it was found the missile and to the surprise of all, spotted by the metal detection machine and two grenades.
The missile and the grenades, it is estimated that he was there from the time of the war of 1940.
Having made the necessary preparations, were transferred to the field of fire in Chrysavgi, Trikala, where the controlled explosion and neutralize them. In the vast area have been found and other times the old ammo.
See the illustrative photos.