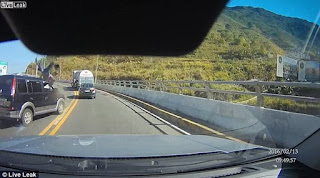 A shocking video of him with a head-on collision of a car with a motorcycle came to the publicity from the Philippines…
The camera of a car records the moment a driver attempts an overtaking on a curve without visibility to see the motorcycle coming from the opposite stream.
The next few pictures are scary. The car falls without a brake at all on the motorcycle causing the rider to be launched in the air and found on the roadway.
“Oh, my god, my God” is heard shouting, the driver of the car, the camera which records the incident.
According to local media, the rider of the motorcycle, “was holy” since, as broadcast, despite the terrible conflict, eventually suffered only a fracture in the shoulder.