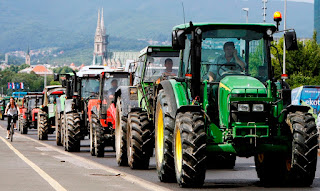 Firm at the roadblocks remain the farmers in Northern Greece…
Watching the developments, they are in continuous consultations in order, as they themselves say, to the Athenian News Agency, “not attempted secret meeting, or a move by anyone, any power, and if it belongs to”.
The current programme of industrial action in the B. Greece is as follows:
In the prefecture of Pella the decision, which was adopted, relates to a closure of nodes: ÎœÎµÎ»Î¹ÏƒÏƒÎ¯Î¿Ï…, Montenegro, Noon, Chain Vegoritida and Î‘ÏˆÎ¬Î»Î¿Ï… (18:00 – 21:00) and Î“Ï…ÏˆÎ¿Ï‡Ï‰ÏÎ¯Î¿Ï… (17:00-17:30).
The Serbian bridge in Giannitsa, the current block is set for the hours 11:00-18:00, with a member of the steering committee of the block, Panagiotis d. andrikopoulos, points out to ana-MPA: “In general assembly that we have today, we will decide, and the alternative way of escalation for tomorrow.”
In blockade of the road in the time interval 10:00-18:00 progress of participants in the blocking of Chalcedon.
In the prefecture of Pieria, in Î‘Î¹Î³Î¯Î½Î¹Î¿ and Katerini, in accordance with the member of the steering committee, Christos Vagias, continued the blockade for the third day today.
Under occupation remains the Egnatia motorway at junction of Kerdyllia. Later it will be decided if it will close the passage for the bypass, the old national road Thessaloniki-Kavala. Remain the roadblocks of ÎšÎ¿ÎºÎºÎ¹Î½Î¿Î³ÎµÎ¯Ï‰Î½ and Prosotsanis of the prefecture of Drama.
In the prefecture of Kilkis, where they have set up two roadblocks at the customs offices of the Evzones and the Doirani, on the border of Greece and fyrom in the first will continue and today the block (12:00-15:00 and 20:00-23:00) and in the second the crossing will be closed from 19:00 to 23:00. Speaking to the Athens News Agency, the member of the steering committee of the roadblock at the customs office of Dojran, George Terzis, informed that tomorrow from 10:00 to 13:30 is occupied the TAX office, prefecture of Kilkis, both from people in the primary sector, and a world of other professional disciplines.
The toll of ÎœÎ±Î»Î³Î¬ÏÏ‰Î½, continues the exclusion. “I’m not going to open until Friday, unless we believe that because of the weather that may plague you, through the detours, drivers and cause an accident,” said to ana-MPA, the head of the steering committee of the roadblock, Achilles Hunchback.
In exclusion remains for more than two weeks, the node of the ÎÎ·ÏƒÎµÎ»Î¯Î¿Ï… on the Egnatia motorway in the section of Thessaloniki-Veria. It is recalled that symbolically at the roadblock erected tent, with the participants in this to send a message that they do not intend to leave.
At the junction of the Coil (Imathia), on the Egnatia Road Thessaloniki-Veria, every day becomes a symbolic blockade of one hour from 16:00.
Source