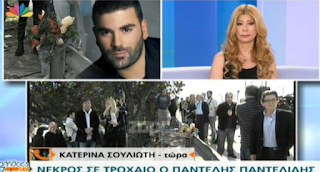 Devastated Konstantinos Argyros, could not utter a word to journalists. It was from the morning to the hospital, crying constantly…
The singer said that she couldn’t believe that a few hours before it was to Pantelis Pantelidis in the nightclub.
Cut the keyring with the name in the wreckage
According to the story of Katerina Souliotis on the show “Truths Xena” last night, Despina Vandi, Pantelis Pantelidis Kostas Martakis rehearsed as tomorrow they would premiere in a nightclub. Konstantinos Argyros that was going to work with Pantelis Pantelidis next summer, he went by the shop. Pantelis was very happy and said for the first time to Constantine: “Constantine, you’re a friend and I love you very much”! She hugged him, kissed him, and they said they would chew it soon.
Pantelis Pantelidis stayed at the nightclub until 4 in the morning. Has not been known even that was from 4 until 8:20 that was in a car accident.

Pantelis Pantelidis: The picture that shows WHAT THEY did a few hours before rolling – The Ï€Î¿ÏƒÏ„Î±ÏÎ¹ÏƒÎ¼Î± of a girl [photos] 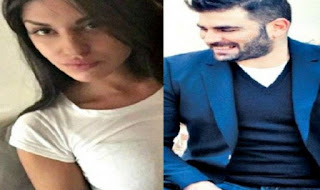 All morning we hear about the two women who were in the car, Pantelis Pantelidis and in the fatal car accident…
Read more “

The family of Sade, appointed expert – The first of the statements… 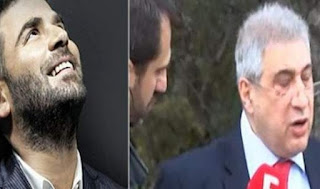 The family of Pantelis Pantelides has appointed its own expert to investigate the causes and circumstances of death of the unfortunate singer.
Read more “ 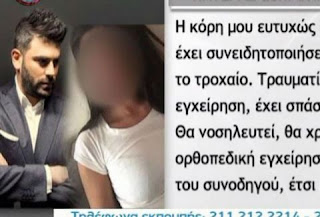 Shocked the father of a girl from the two, who were at the time of the fatal accident, the vehicle Pantelis Pantelidis.
Read more “