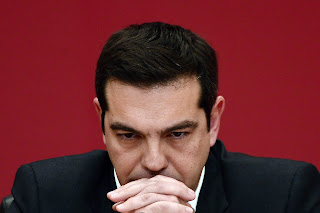 In the face of danger to fill the whole of Athens with thousands of tractor…
and enraged farmers, and with the roadblocks already causing serious problems in the economy and the country, the government seems to be, in accordance with information, ready to withdraw the insurance of farmers.
In particular, strains of the ministry of Labour seem to have worked out a different plan for the insurance of farmers with a different “architecture”, which basically means that everything we knew until now about the settings of the insurance for farmers shall not apply.
The government is working on this project, and has focused mainly on the issue of contributions, so that farmers would have lower contributions in a completely different sense than the Greek proposal to the lenders for the insurance.
The new plan for insurance exclusively for farmers not to be made public, but the government intends once again to invite the farmers in a dialogue by telling them in effect: “come to unveil our new proposal for health insurance”.
The question that is automatically generated is if this new plan of government for the farmers have the approval from the lenders or even if you have updated the institutions.
The answer of the government is that the big problem is the fiscal gap, and from the moment that there will be agreement on this will enable the government more easily to solve, and the insurance and the tax.
Indeed, in accordance with information of NewsIt on the recommendation of the prime minister during the cabinet is expected to address once again call on farmers, without, however, to give details about the new plan.
New ultimatum from the farmers
“We ask the government a political solution. No repression and criminalisation of our struggle. We declare that we will not leave from Athens empty-handed”.
This is the answer given by the farmers of the block, Nice to the government on the occasion of today’s statements of the governmental representative concerning the descent of the tractor in Athens, greece.
In his statements to ana-MPA the well-known Î±Î³ÏÎ¿Ï„Î¿ÏƒÏ…Î½Î´Î¹ÎºÎ±Î»Î¹ÏƒÏ„Î®Ï‚ and president of the United Federation of Agricultural Associations of Larissa Rizos Maroudas, highlights the firm attitude of the farmers to descend on Friday in Athens, and notes: “We, I’ll be down in Athens in the context of an escalation of industrial action. Our problems are problems of survival, and our demands must be met if they want to remain in our fields. We ask the government a political solution and not repression and criminalisation of our struggle. In this sense, we say that and we made the descent in Athens and we will demonstrate in the Constitution together with the people of Athens and to express the sympathy in our fight, but to fight together, after the request for withdrawal of the insurance and the tax is joint and the joint struggle will be most effective. We declare to the government that they will not leave with empty hands”.
In preparation of descent in Athens, on Friday, the meetings are repeated for the best possible coordination, while as announced in its communication today the Nationwide Committee of the ÎœÏ€Î»ÏŒÎºÏ‰Î½ tomorrow at 10 am.m. there’s a Press conference at the offices of the ” general theme “why we come to Athens, what we claim and why.”
In the meantime, continuing the inclusive provincial roads and alternative routes, today from 5 until 8: 30 pm.m. remained closed in the provincial road Larissa – Agia, at the height of Î“ÎµÏÎ±ÎºÎ±ÏÎ¯Î¿Ï…, closed from 5 in the afternoon and for an hour and a half, the node Î Î»Î±Ï„Ï…ÎºÎ¬Î¼Ï€Î¿Ï… in the old E.The. Larissa – Volos and was also closed, and the new E.The. Larissa – Kozani from the 4 m.m. at the height of the argyropoulio has followed.
Source