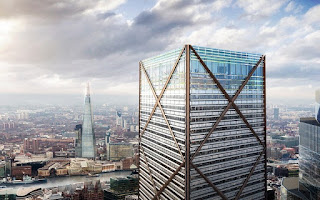 A new skyscraper is planned to be built in London, from which… the views of the british capital will compete seriously in the view from the tower Shard, now the highest building in the European Union.
The skyscraper “1 Undershaft” will have 73 floors and a height of 309,6 meters – that is the same with the Shard, which will be located opposite, on the other bank of the river Thames.
The building has been designed by the architectural firm Eric Parry Architects on behalf of the company Aroland Holdings, based in Singapore.
On top of that there will be an observatory with a free entrance and will also include a training center, which will be school trips.
“The tower 1 Undershaft will generate quality office space which is much needed in London, and will set new standards of comfort, quality, and environmental sustainability,” said Eric Parry.
“Most tall buildings are used Monday to Friday but the 1 Undershaft will operate seven days a week and people will be able to enjoy a new square, a new watchtower of the city and a restaurant open every day. We hope Londoners to be very proud of
According to the Daily Mail, the plans for the construction of the skyscraper have been revealed since July but have not yet been submitted for approval to the competent commission of the city of London.