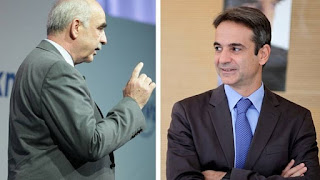 The “decryption” of the results of the ballot box of the first Sunday tasked the staffs of the two candidates for the presidency of the SOUTHWEST. From the results of…
these will indeed be useful conclusions and for the way they choose the voters of the party to vote on 10 January.
A first reading of the distribution of the votes of the first Sunday shows, first, that Kyriakos Mitsotakis won votes in the big urban centers in contrast with Vangelis Meimarakis, which won the largest share of the polling centers of the province, except Northern Greece. There are not able to draw safe conclusions, since in many polls the most votes took the Apostle Tzitzikostas, who is not qualified for the second round of the elections.
The Î½ÎµÎ¿Î´Î·Î¼Î¿ÎºÏÎ¬Ï„ÎµÏ‚ voters in Northern Greece is one of the main objectives of both the Vangelis Meimarakis and Kyriakos Mitsotakis. The staff of Vangelis Meimarakis appreciate that most of these voters belong to the so-called “ÎšÎ±ÏÎ±Î¼Î±Î½Î»Î¹ÎºÎ® voltage” and for this reason the placement Meimarakis that it wants a “ÎšÎ±ÏÎ±Î¼Î±Î½Î»Î¹ÎºÎ®” New Republic, gets this portion of the voters. Opposite is the view of the chiefs of staff of Kyriakos Mitsotakis who appreciate that those who chose the Apostle Î¤Î¶Î¹Ï„Î¶Î¹ÎºÏŽÏƒÏ„Î± looking for something new and refreshing for the SOUTHWEST the next day, so they move closer to the nomination Mitsotakis.
Very difficult is expected to be the battle among young people .The qualitative features of the results of the election of the first Sunday show that the votes were shared between Meimarakis and Mitsotakis so this field becomes, by definition, very difficult. Here seems to have an “age” exact Kyriakos ÎœÎ·Ï„ÏƒÎ¿Ï„Î¬ÎºÎ·Ï‚Ï‰ÏƒÏ„ÏŒÏƒÎ¿ this is not enough to win the young.
Next difficult field this time for Kyriakos Mitsotakis seems to be the “female” tank of the party. Women voters, and particularly at ages over 35 years of age chose mr Meimarakis. Kyriakos Mitsotakis on the contrary shows that won the men of the so-called productive age i.e. 25 to 45 and even with quite a large percentage of both the urban centres and the province.
The decryption of the results will continue next week and the candidates will form, respectively, the strategy in the “common” those who have turned their backs.
Source