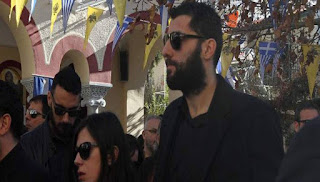 Inconsolable, Giannis Bourousis and son-in-law, Makis Psomiadis to the funeral of his father-in-law in New Philadelphia…
The Greek international center who after the death of Makis Psomiadis traveled twice to Greece in a few hours to support his wife Christina, and daughter of the deceased, was a tragic figure in the funeral sequence.
Yes, Bourousis was quite a heartbreaking final farewell to lily savage, with whom it seems they had a great “bonding” in the last few years while had given and the first of the grandchildren.
The hour of parting the Bourousis left symbolically cigars and a rosary in the coffin of Makis Psomiadis (his favorite accessory), and crying aloud to the side of the said characteristics “thank you for the last three months to do the surgery and you unfortunately put it off, and the last time you said I’ll go after Christmas”.
Source