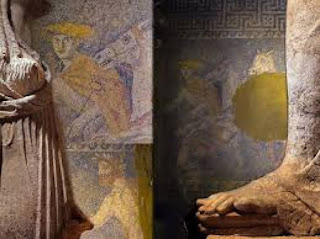 The creation of a pan-hellenic network of municipalities where… developed great ancient civilizations â€“Minoan, Macedonian – progressing jointly by the municipalities of Lasithi Plateau, Amphipolis and Messina .
In an event organized by in Drama the University of Piraeus on the role of the MFA in promoting culture as a factor of coupling of Hellenes abroad with the roots through innovative and creative processes of participation, the mayors of the Plateau of Lassithi Giannis Stefanakis, Amphipolis Kostas Melitos, Prosotsanis Angel Î›ÏÏƒÏƒÎµÎ»Î·Ï‚ and Messina George Tsonis announced (after the proposal of mayor Yiannis Stefanakis) the creation of a pan-hellenic network of municipalities where developed ancient civilizations. Aim the production of cultural-cultural activities that will promote the country internationally and will enhance even more the tourist industry.
In fact, in his address, in the event, the mayor of Lasithi Plateau Giannis Stefanakis was mentioned in the movie-documentary “A God is born” directed by Eleni Vlassi and presents documents to the interface of the Minoan and Macedonian Civilization that left their “marks” in the Dikteon Andron. The shooting of the movie duration of 1 hour, was attended by 70 residents of the Lassithi Plateau age from 6 to 80 years of age.
“This is an excellent initiative that we undertake jointly by the municipalities of Lasithi Plateau and Amphipolis, where archaeologists recently brought to the “light” of a great funerary complex. The cultural network will participate, and other municipalities with the support of the Ministry of Culture, aiming at the production of culture, the view, and further enhancement of these areas at tour level. Our great heritage is our culture, which we utilize effectively to the benefit of our tourist product,” said the mayor of Lasithi Plateau Giannis Stefanakis.