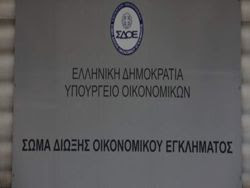 According to the decision signed today, Friday, in accordance with the announcement of the…
ministry of Finance, the lawyer, Konstantinos Christos, is the new Special Secretary of the Body, Prosecution of Economic Crime (SDOE). Constantine, Christos was born in Athens and is originally from Boeotia.
He is a graduate of the Law Department of Democritus University of Thrace (DUTH), and exercises from the year 2001 fighting practiced law in Athens with scientific expertise in the entire spectrum of commercial law and economic criminal law. She worked as a legal adviser and a lawyer, a civil action for research, disclosure and submission of Î¼Î·Î½Ï…Ï„Î®ÏÎ¹Ï‰Î½ petitions in cases of financial scandals that dominated the public opinion over a number of years.
He is married and father of a daughter.
Source