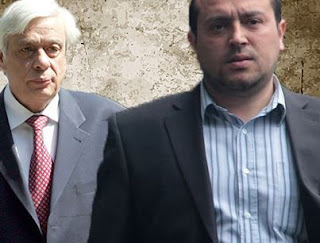 Writes Spiros Rizopoulos
Anyone who listened carefully to the… Nikos Pappas in the debate in the House for television licenses, he could decode it easily the strategy it has chosen. The government is embarrassed in front of the huge impasse that has created the same. Firstly, because it is a matter of quality of human resources in the civilian personnel with the result of the incompetence and amateurism to make a snap. Second, and more serious, is the obsession he can’t implement those agreed with the lenders, so Î¼Î¿Î¹ÏÎ¯Î± led to a conflict with them.
So she put the first issue on the government agenda, the licenses of channel â€“ like how many channels we have considered the fate of the country at this time â€“ only to shape the political alibi of firm failure and great damage done in the country. To be even more convincing alibi, the Priest attempted from the outset and continues to displays its own policy as a continuation of the policy for the “basic shareholder” of the period of governance of the country by Kostas Karamanlis.
Of course, there is a serious difference that there is no mention. Karamanlis never came out like Tsipras to announce a limited number of licenses. Transparency rules attempted to impose, and not to limit the exercise of the right to information and control of the tv landscape, such as attempts by the present government. So we’re talking about “day to night” and any correlation is completely arbitrary.
However, it is precisely in this “game” on the back of Kostas Karamanlis, unfortunately, is involved, and the President of the Republic, Prokopis Pavlopoulos as it seems he still has issues about the failure of the law of “the basic shareholder”. Not only “bless” the narrative of the Priest and provide “legal support”, but essentially you will be the one who, in his narrative “the interweaving throws us because of the licenses” will attempt to put the issue of forming coalition government with prime minister Kostas Karamanlis.
As all of these evolve in absentia and without the knowledge of the Karamanlis and judging by the vertical reaction at a recent publication that attempted to implicate him in scenarios of political developments, should this “dirty game” to stop and let the Karamanlis out of Ï„Ï…Ï‡Î¿Î´Î¹Ï‰ÎºÏ„Î¹ÎºÎ¿ÏÏ‚ communication plans.
A simple and honest confession of failure of the rulers would be enough and to move on…
PS1: Legal I am not, but based on common sense, taking the responsibility of licensing by an Independent Authority, the ESR, and to give the “gardener” (whatever your name is, and if he technically has) like a coup!
PS2: Well, everyone else but the President of the Republic as a reputable lawyer does not know in advance how the setting Pappa will be forfeited to the State Council for? Why does evolving a mistake, and indeed to participate in this? The question is not rhetorical. Unfortunately has no answer. Only to have staged the “spectacle” of the fall in the eyes of the world.
Source