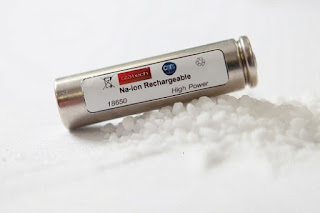 Hillary Brooke
The result of the first effort of French researchers to build a rechargeable competitor to the…
lithium-ion batteries may be found in the market in 5 to 10 years.
This is the first battery sodium ions in industrial size. The rechargeable ion batteries sodium Î±Ï‡Î½Î¿Ï†Î±Î¯Î½Î¿Î½Ï„Î±Î¹ in the set for decades, could be a more economical and more affordable alternative to the lithium-ion batteries that feed the electronic devices, such as mobile phones, laptops and electric cars.
Do you mind a little sodium to the rechargeable battery? Researchers in France have announced that their first prototype for a small-sized battery sodium ions.
Although the batteries, sodium ions are at work here, and decades, this prototype is the first to mount a salty solution in a rechargeable form. Don’t rush, however, to dispose of the old lithium-ion batteries, as well as in accordance with the chemist Jean-Marie Tarascon, who has helped in the creation of the prototype, it is likely to take approximately 5 to 10 years until the original placed on the market.
Creation of a team of researchers battery based at the National Centre for Scientific Research of France, the new battery sodium ion 168A is a rechargeable battery that is larger in size compared to the household AA battery (168A are used in laptops, electronic cigarettes as well as electric cars like the Tesla).
And can the battery may not be at the same level with current lithium-ion batteries, the original, however, may well be compared with some of the first lithium-ion batteries of Sony that made their appearance in the early 1990s. With a satisfactory energy density, can hold up to 2,000 charges and recharges before its performance to decline.
There is the expectation that these new batteries are sodium ions, with a slight improvement, can emerge as an important competitor in some parts of the multi-billion dollar market for lithium-ion battery (the market is projected to grow to over 33 billion. dollars in 2019). The sodium, being readily available around the world, could provide a more abundant â€“ and cheaper â€“ alternative.
The batteries of modern mobile phones and the power supplies of the computer are made from, more rarely, volcanic rocks, and underwater salt lakes, while the batteries, sodium ions could be derived from a less rare natural sources, such as, for example, from sea water.
Some other researchers have proposed their own solutions against a possible impending shortage of lithium, as the harvesting of seaweed, but so far no one has managed to implement this technology.
The new batteries will have to become faster and stronger in order to compete for a position in the market of lithium-ion batteries. In November, Huawei revealed the more modern, quick-charging technology of lithium-ion batteries â€“ charge a phone approximately by 50% in just five minutes. If the original of the French be able to stand competitive in the latest technology, then they might deserve a place in the battery market.
Source