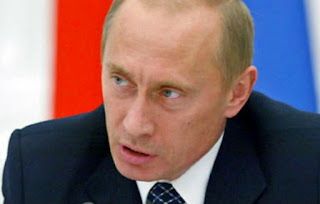 An interview given by the acting minister of Finance of the USA, which is responsible for issues…
terrorism and financial crime Adam Î£Î¶Î¿ÏÎ¼Ï€Î¹Î½, in an interview with BBC Panorama has caused a stir. The Î£Î¶Î¿ÏÎ¼Ï€Î¹Î½ called directly, the Russian President corrupt!
The U.S. considers the president of Russia Vladimir Putin’s corrupt and that they know about “many, many years,” said the official of the american ministry of Finance in interview to the british network BBC. The Kremlin has flatly rejected these claims, noting that amount at the level of the “formal category”.
The Russian president brings together the secrets of wealth, said Adam Î£Î¶Î¿ÏÎ¼Ï€Î¹Î½, in an interview with BBC Panorama.
“We’ve seen him make rich friends, the closest of allies and marginalises those who he considers friends, using state resources. Whether it’s the energy wealth of Russia, either for other government contracts, directs those who he thinks will serve him and exclude others who do not. For me, this is a picture of corruption,” said Î£Î¶Î¿ÏÎ¼Ï€Î¹Î½, according to the BBC.
The Î£Î¶Î¿ÏÎ¼Ï€Î¹Î½ declined to comment, adds the british network, on report of 2007 of the Central Intelligence Agency (CIA) of the united states, in which the wealth of Putin is estimated to amount to approximately $ 40 billion, but noted that the stated wealth of the Russian leader is underrated.
“It supposedly has state payoffs (corresponding) somewhere around $ 110,000 a year,” noted the Î£Î¶Î¿ÏÎ¼Ï€Î¹Î½. “This is not an accurate statement of the estate of this man and he has a long training and practice with regard to how to hide the real wealth”.
How much money is Putin?
In accordance with what is known from the property of statements, Putin is a man of a moderate income. In April, Putin declared for the 2014 income 7,65 million roubles (approximately 119.000 usd). Also said two medium-sized apartments, and a share in a garage car parking.
The US has imposed sanctions on a number of Russian businessmen loyal to Putin, in the framework of their policy to exert pressure on Russia for its role in Ukraine.
In March 2014, the ministry of Finance of the USA has linked Putin with profits from one of the entrepreneurs to whom sanctions were imposed, Gennady Î¤Î¹Î¼Ï„ÏƒÎ­Î½ÎºÎ¿, one of years known of Putin and then co-owner of Gunvor, which trades nearly 3% of the world’s oil. “The activities of the Î¤Î¹Î¼Ï„ÏƒÎ­Î½ÎºÎ¿ in the energy sector were associated directly with Putin. Putin has investments in Gunvor and may have access to the funds of the Gunvor” the ministry said in a statement in which it announced the sanctions, according to Reuters.
The Gunvor, which has its headquarters in Geneva, in which no sanctions were imposed, denied these allegations in the statement of the ministry of Finance. “President Putin has not and never had, any property, benefit, or anything else in Gunvor. Is not a beneficiary of Gunvor or its activities,” said company spokesman Seth Thomas Î Î¹Î­Ï„ÏÎ±Ï‚ in email.
This publication of the BBC follows a few days after the publication of the findings of british research, according to which Putin approved a probably a business in 2006, the Russian Intelligence services in the murder of former KGB agent Alexander Litvinenko with the radioactive substance polonium-210 in London.
The Kremlin rejected as “sheer libel” the charges of corruption made against Putin and caused Washington to give “tangible evidence”. “This is a formal category,” said the representative of the Russian president Dmitry Peskov to reporters in a conference call.
The bilateral relations are now in such a situation that a lie such as this is unlikely to worsen another,” added Peskov. “This is clearly a fabrication and defamation, without any relationship with reality. We have been familiar with this kind of journalistic tricks associated with impotence, with the hunt for this that causes a sensation and the theatre”, he also noted.
“All this would be only a new example of the usual of this irresponsible journalism if it was not official comments of the american ministry of Finance,” he added. “The wording of such categories from the perspective of an institution such as the american ministry of Finance, without being given hard evidence cast a shadow in this institution,” he continued. “It is not our role to demand evidence, it is the role of this institution to bring (evidence) and to establish that the official announcement is but clearly a defamation,” he concluded Peskov.
Source