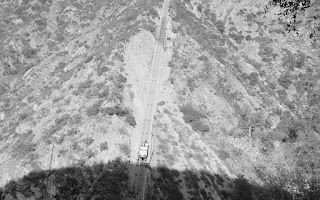 The railway line “climb” in Los Angeles, California, aged 123 years, a few years ago…
abandoned after a series of natural disasters, depicting the photos below.
The line of Mount Lowe Railway, which today is out of order in a state of dissolution, was the third of the “uphill” rail lines that are made in America to boost tourism in the area.
Opened in 1893 and became the first electric railway line in the united states. Covering a distance of seven kilometres, starting in the Altadena, to the station at Mountain Junction and crossing the areas of Mount Lowe and Echo Mountain, where it was popular then hotel, Echo Mountain House.
With the passage of time, however, fewer and fewer tourists were visiting the spot, at a height of 5606 feet at the mountain Lowe, who lost his appeal due to a natural disaster.
In the 1900s the kitchen of the Echo Mountain House fire that spread with the result to cause damage to the hotel. Followed by other fires and other floods that destroyed the remaining facilities.
Forty-five years after the opening of the street, flood has caused a re large disasters causing the abandonment of the station – which has not since been reopened ever.