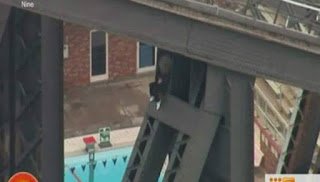 The police arrested a man this morning, who had climbed…
the bow bridge in the port of Sydney (Sydney Harbour Bridge).
The decision to climb the bridge caused a serious problem in the smooth movement of vehicles in the rush hour, the police had to interrupt the circulation of vehicles in the surrounding streets.
The man was wearing black clothing, white shoes and sunglasses, arrived at the famous bridge in a taxi, before the start of the climb.
The motives of this act, have not been clarified for the man who came down from the bridge, after two hours. Then, he was arrested and was taken to the hospital in order to assess the state of health.