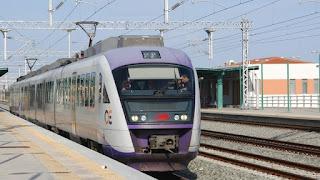 Trains and suburban remain immobilized, the trains of the power station is not….
move because of the repeated strikes and work stoppages of workers, but still the payroll runs and month get month out, the workers are paid the matter is even if you don’t produce a transportation project.
And while the travelling public there is all this time incredible hassle and the already burdened finances transport companies sink more and more because of the strikes, the workers at TRAINOSE and urban transport by following various tricks manage to sit and at the same time to get paid!
As revealed by the daily journal, 95% of all rail said the day off (which they are entitled because of overtime or sick leave during the last demonstrations. Some even stated that they wanted to work but due to occupation in the premises of the company were not allowed (by their fellow trade unionists) to “hit” the card and to indicate attendance.
All three of the above categories will not suffer any reduction in wages due to participation in the strike.
Something similar is happening with the workers in the urban transport sector who have been on strike for the inclusion of agencies in the new superfund. On the subway, for example, announces a call for a strike, a union which if it is from office can’t release the metro. The workers in the other areas of the metro are not working but since they are not the ones who have launched the strike is normally paid for. However, the unions do strike, as reported in the journal, following the regular day off of sick leave during the days of the strikes, thus managing to not undergo any cut in their salaries