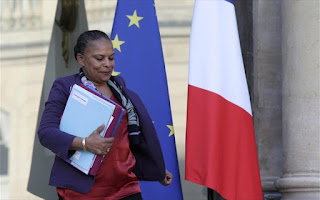 The resignation, submitted today to the minister of Justice of the… France Christian Î¤Î¿Î¼Ï€Î¹ÏÎ¬ having expressed earlier reservations about the constitutional reform that provides for the deprivation of French nationality from individuals who have been convicted for terrorist activity, subject to conditions.
The resignation of the minister of Justice, announced the French presidency, stating that it was accepted by the French president Francois Hollande. The position will be taken by Jean-Jacques ÎŸÏ…ÏÎ²Î¿Î¬Ï‚, known for his positions in favour of constitutional reform.
“Proud of. Justice gained in strength and vigor. As those and those who devote themselves to her every day, I dream about invincible… sometimes you resist staying, sometimes resist leaving. By faith in you, in us. To have the ethics and the law the last word,” wrote in her account on Twitter the Christian Î¤Î¿Î¼Ï€Î¹ÏÎ¬ some time after the announcement of her resignation, which – according to the press – surprised members of the French cabinet.