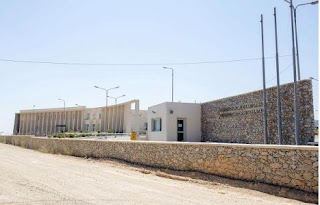 The ÎšÎ±ÏƒÏƒÎ¹Î±Î½Î®Ï‚ Î¤ÏƒÏŽÎ½Î·
Last week, the Board of directors of the public Limited Company Health Units (Î‘Î•ÎœÎ¥) announced the approval …
62 even recruitment (an employment relationship under private law fixed-term for 12 months) to cover the needs of the newly established General Hospital Hunting. In recruitment these include 21 doctors.
With this new approval, the total number of recruitment is 123 people.
This completes the implementation of the objective, the Î‘Î•ÎœÎ¥, operation of the hospital to cover the health needs of the residents of the island and multiple visitors of Santorini. The effort started 10 months ago a very complicated and demanding effort, with the administrative reception of the Hospital by the Contractor of the project, namely: A.E.
But in spite of the quick actions taken by the Î‘Î•ÎœÎ¥ and the Ministry in order to work in the summertime the hospital, is in danger of the operation, since it has predicted you will find all this staff.
Specifically, the people desperately looking for homes to stay, but I don’t seem to find it anywhere. The phone of the town Hall has been broken in order to give some information on pensions, but fails to serve them.
Of course, if you want to find tourist accommodations be rooms, but the owners charge by the day. Of course, the people who will get clean from 600 to 900 Euros in hand they have no option to incur such large costs.
The reason you can’t find accommodation at this time the new recruits in Santorini, is not that there is completeness of tourists to the island, but the island already accommodates all of the seasonal staff that comes to work during the summer months, with the result that there are available accommodations.
Of course, there’s another version, that the new staff does not stay, because it is not from Santorini. For several months now, there is a debate, on the island, for the locale of the staff.
You will also need to ask ourselves what logic constructed in such a modern and big hospital, which cost 14.000.000 to the Greek State, and there was no provision for the accommodation of the personnel who staffed it.
It is therefore very likely that in the absence of a residence to be problems of operation of the hospital during the summer months.
Source