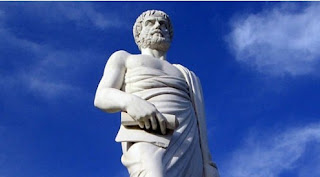 A Primary School of Igoumenitsa, as it was informed in the previous announcement, took part, with students of the E and F class on 17 March 2016 in the pan-hellenic… contest Natural grade “Aristotle” 2016. The competition was organized by the University of Athens â€“ Department of physics, on the occasion of the proclamation of the UNECO of the year 2016 as a “Î•Î Î•Î¤Î•Î™Î‘ÎšÎŸ YEAR ARISTOTELES”. Our students, who took part, as we already announced in the first phase of the competition, they achieved significant results, while after selection made on the basis of the evaluation of the writings of the students, continued in the second phase of pan-hellenic range, where now we have the pleasure to announce that it has won awards of excellence and special commendations.
In particular, the student of the sixth grade, Candace Fotis won the third prize of excellence, while six (6) of our students were awarded by the National Organizing Committee of the contest with Î•ÏÏ†Î·Î¼Î¿Î½ Reference. These students are: Kostis Angel (E-Class), Î›Î¿Ï…Ï„ÏƒÎ¬ÏÎ·Ï‚ Michael (E-Class), Papazoglou, Apostle (R Class), Î›Î¹ÏŽÎ½Î· Peace (F Class), Kingdom Nikolaos (F Class), Î¤ÏƒÎ¬Ï„ÏƒÎ±Ï‚ Leonidas (F Class). They deserve congratulations for these children and their families. The award ceremony will be held by our school with the start of the next school year (September 2016).
We note that, the participation of the students in this National Contest of “Aristotle” 2016, not aimed at any economic league rankings, nor the good performance was an end in itself. Their participation was aimed to familiarize them with an environment emulation, wider in the school, with synthetic questions increased as a rule of difficulty, which contained the necessary questions and experimentation, as required by the international practices of Science education. For this, and did not require special preparation of the students for this competition, but the development of critical and creative thinking, on the basis of the existing knowledge and skills gained by students in the course of the Natural sciences and their ability to use them appropriately, in order to interpret the world around them. Through this process the students do not face anymore the natural phenomena of random and disconnected from reality, but are asked in a systematic way to observe and record their progress and learn to organize their observations in order to correctly interpret the world around them, without prejudices and superstitions.
With the end of the contest, I feel, also, the need to particularly thank the teachers who teach the sections of E and F class of our school, mr Theologian Stephen, ÎœÏ€Î¬Î¶Î¹Î¿Ï… Design, Konstantakou Agriculture and ÎœÏ…ÏÎ¹Î¿ÏÎ½Î· Dorothea, because with their attitude and their help, led the children with success in this process.
The Director of A Primary School of Igoumenitsa
George ÎšÏÎ»Î»Î±Ï‚