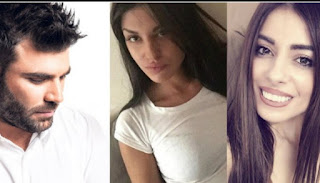 “One girl gave us a deposit on the same day. The other was in Intensive care when he came to…
And the two said who is the driver and that he was running without contact between them”.
According to the story of the NATION of Sunday, signing the Î•Ï…Î»Î±Î¼Ï€Î¯Î± Î¡Î­Î²Î·, on the part of the police investigation the question as to who was holding the steering wheel at the time of the fatal crash, in which he lost his life, Pantelis Pantelidis, it was clear from the beginning. For this reason, moreover, was not measuring alcohol in the two ÏƒÏ…Î½ÎµÏ€Î¹Î²Î¬Ï„Î¹Î´ÎµÏ‚, Mina (and Froso Kyriakou.
As stated in the newspaper, a police officer involved in the investigations “when we came for the event from the first moment it was clear that the driver was the man who we later found out that it was Pantelis Pantelidis. His body was on the driver’s side and his head leaning to the passenger side.
The Froso Kyriacou was in the passenger seat
Beside him in the passenger seat was a girl (p.p. the froso Kyriakou) which is evacuated from the side of the driver, as it was impossible to get out of the passenger side of the car in which he was”. Based on the same testimony, the Mina was the first person evacuated. He had a strong concern and she said, what was the identity of the driver, that is to say, the well-known singer”.
Testimony of an employee of the AMBULANCE, the deposit of which is in the possession of the NATION and is included in the voluminous case file, reports: “In control in the car I saw a man in the prone position with the feet in the driver’s seat and head towards the passenger side down towards his chest and in an unnatural angle”.
Outside the vehicle: “Together with one other gentleman out of the vehicle a girl who was in the back seat, which told us that it’s called Mina as she was afraid it would blow up the vehicle,” says, at the same time, the testimony of the man who arrived first at the point of the accident and saw the fatal jeep “is in the air and lands on the sky of the car”. In his supplementary statement notes: “Î‘Ï€ÎµÎ³ÎºÎ»ÏŽÎ²Î¹ÏƒÎ± the girl, which cried out for a man, and then I saw a male head between the front seats. I couldn’t see his body as well as my attempt to Î±Ï€ÎµÎ³ÎºÎ»Ï‰Î²Î¯ÏƒÏ‰ the girl didn’t notice to what point it was facing.
My guess because of the dial was that it is the driver of the car. Another girl was on the right side of the car as I came to this, that is, from the left of the car”.
And the two said who is the guide without contact between them
Despite these data, which have been seen occasionally in the limelight, one of the widely reproduced “conspiracy theories” in social media remains that on the basis of which the Froso Kyriakou was a guide and Mina (lying. And in this scenario a police officer who participated in the survey stresses: “one girl gave us a deposit on the same day. The other was in Intensive care when he came. And the two said who is the driver and that he was running without contact between them.
Their deposits converge, and the measurements showed that the vehicle speed was 118 km. It is impossible to have spoken before Mina give a statement to authorities”. Besides, as he notes himself, “the DNA tests made on the steering wheel of the car was found in human tissue only by Pantelis Pantelidis. DNA Î¦ÏÏŒÏƒÏ‰Ï‚ Kyriacou was found in the a-pillar of the driver because when evacuated, having wounds in the head out of the driver’s side, and when drew left this as a “sweep”.